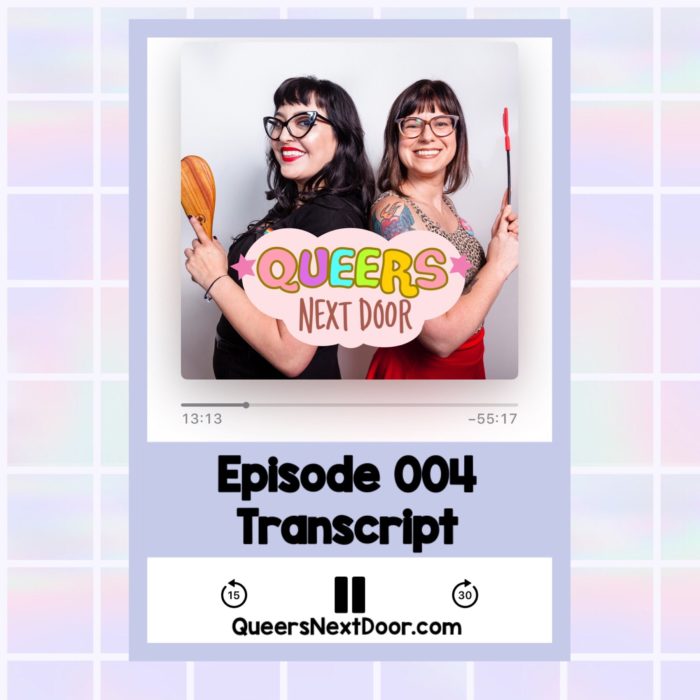 Ad begins:
Megan: Are you feeling stuck in your relationship? Are low libido, orgasm difficulties, or body image getting in the way of an awesome sex life? Are you looking for a safe space to explore kink, nonmonogamy, gender or sexual identity? Sex Coach Leigh works with individuals or couples via Skype or phone to address whatever is blocking you from your ideal sexuality. She is sex positive, body positive, queer, and polyamorous. Let her help you discover the most authentic version of yourself. Contact Leigh at sexcoachleigh.com. That’s L-E-I-G-H, and mention Queers Next Door for 20% off your first session.
End ad

M: So we wanted to take this time to read out iTunes reviews. There’s two of them and there are nine star ratings, so yay! There’s mostly five, one four, which I wanted to know why.
L/M: (laugh)
M: Let us know how we can please you. (laughs)
L: Let us know how we can turn that four into a five.
M: (laughs)
L: But we also want to take the opportunity to say that reviews really do matter so if you can please leave us a review on whatever podcast delivery system you are using. Subscribe. Let’s see. Because of Instagram and other things, we get so many nice comments from all of you, so if you, and we want you to keep giving them to us, so thank you. But if you want to turn those into reviews, we would love it!
M: Yeah.
L: From listener fofinatrix, called Wonderful new podcast:
“Am loving this podcast already, Leigh and Megan provide personal, sex positive, queer positive content infused with humor and heart. A joy to listen to.”
Hey, thanks.
M: Thank you. Okay, the next one is from alabamabadmammajamma. It says:
L: I love it.
M: Love it.
“Megan and Leigh are a delight to listen to, well informed and oozing positivity. This podcast is perfect for anyone who wants to hear more about queer, poly, sex positive, social justice goodness. I look forward to hearing many more episodes.
L: Yay!
M: Thank you alabama.
L: Thank you. I think you also wanted to mention a message you got from somebody.
M: Oh, yes. I had a message from someone that said that they listened to episode one with Leigh talking about PMDD and they went to the doctor and said, “I have all these symptoms and I just learned about this” and the doctor was like, “Oh, I would have never thought about that, but yes.” And they are now like, she was diagnosed with it.
L: That’s amazing.
M: And they’re gonna start doing, I don’t know, stuff to try to help the symptoms.
L: Yeah. And when I say that’s amazing, it also super sucks. But as I’ve said, PMDD is a hard thing to diagnose and it’s often misdiagnosed, so I know how much of, even though there isn’t a cure, how much of a relief it is just to like know what’s going on.
M: Yeah.
L: So that makes me feel really good. If anyone else feels like this stuff resonates with them and you have questions, you can reach out to me. Also, we’re going to do an episode soon where we read some Ask Sex Coach Leigh questions so continue to send those in. We’re keeping the name Ask Sex Coach Leigh, but it’ll be both of us
M: (laughs)
L: answering together. So, yeah, if you have any questions really about sex, relationships, polyamory, queerness, identity, we got you.
M: Yes. Don’t forget to send those in. We have to advertise that more on Insta.
L: Yeah. So you can send us, whatever’s easiest. You can send us a DM on Instagram or at our email, which is queersnextdoor@gmail.com.
M: Okay, so this episode, episode four, is a continuation of episode three, which we recorded, or I recorded at Thunder in the Mountains with Janet and Ted. So this episode, the last one was really long, so we cut it in two and we’re gonna title it, Claiming Queerness. So in this episode, we talk about what it means to be queer to Janet and Ted and feeling like queerness is a title that needs to be earned. And then Janet and Ted go into a little bit about queerness and BDSM and how the leather community has grown out of queerness.
L: Mmhm.
M: So it’s really interesting. It’s only about thirty minutes long, so I did an introduction for each of them in the last episode, but I’ll just kind of recap really quickly. Janet is a consent and sex educator, legalista and advocate, chicana, geek mom, polyamorous, bisexual. She brings a trauma informed lens to relationships, public policy, and geekdom. And Ted is a crisis psychotherapist turned coach looking to help others on their journey to success and confidence. He also actively competes in Brajillion (laughs)
L: Wait, wait
M: Brazillian Ju-Jitsu.
L: I was waiting because I was like obviously you misspoke, but I literally have no idea what word you’re trying to say
M: (laughs)
L: And it was really exciting to see what it was.
M: Well, it says, I wrote BJJ.
L: (laughs)
M: And then I was like (laughs)
L: That’s a different sport.
M: (laughs) So, yeah. So we got really good feedback about them. I love them and I’m glad that everyone else did too. So we hope you enjoy episode four
L: Claiming
M: Claiming Queerness! (laughs)
L: Yay!