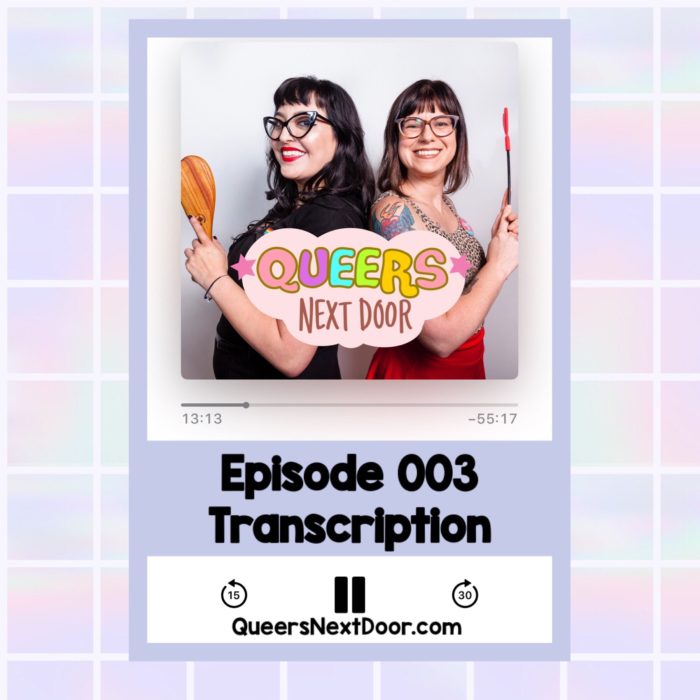 Megan: Welcome to Queers Next Door
Leigh: with your hosts
M: Leigh and Megan. We take the topics you care about:
L: sex, relationships, feminism, kink, social justice, and entertainment,
M: and look at them through a queer as fuck lens.
L: Find us on Instagram, Twitter, and Facebook at Queers Next Door
M: and make sure to follow the blog at queersnextdoor.com.
L: Cheers, queers!

I listened to episode 2 and I just wanted to write to you guys about the whole lack of lesbian community thing. I remember Leigh mentioned thinking L.A. would be this gay paradise and being surprised at how little programs there are for queer ladies. I’m from and live in Philly and we have the exact same problem here. So my question is: What’s up with that? I’ve tried programming committees with friends. I’ve tried planning events with lesbians and/or queer ladies I did not know. Always the same result. I know a lot of LGBT events in Philly historically and currently are heavily planned and attended by men, or at least those who are more masculine presenting. Does this contribute to women not showing up? I know there’s a desire for community. I hear folks talk about it all the time, but as a collective group we do not follow up on that desire. Maybe too much weed and too many cats? Lol. In seriousness, do you guys have thoughts? Have you talked among your circles? I would really like to remedy this problem somehow someway. Thanks for the podcast. The issues and topics are close to my heart and get me thinking and you guys are always good for a good laugh.

L: So, huge caveat, I’m not gonna speak for the trans community or for how different people experience their bodies during sex, but it does seem like there are maybe two different things going on here. That identifying as a  bottom can mean a few different things, right?
M: Mmhm.
L: Like in the sort of typically gay male terminology, bottom usually means the one who’s being penetrated, not the penetrator, right?
M: Mmhm.
L: Bottom can also mean like submissive in more of a BDSM, D/s situation or just the person who is less active in the sexual act, so
M: Mmhm.
L: So you can be bottoming even though you may not identify as a bottom all the time.
M: Mmhm.
L: So the idea of it, doing things that seem more “feminine”… I’m wondering if some of this, and again, all speculation, but I’m wondering if some of this is trans women who have sex with cis men maybe feeling less interested in topping in like an anal sex way because that does feel more quote “masculine.”
M: Mmhm.
L: So I think that makes sense and I could see that being something and then as far as folks not wanting their penises touched, there’s a lot of reasons for people not wanting their genitals touched. Sometimes it’s trauma. Other times it is, especially for trans folks, it is dysphoria. Like they may be at a place where they’re comfortable with parts of their bodies, but they don’t feel, like trans women especially. You’re gonna meet trans women who have vaginas. You’re gonna meet trans women who have penises and are super cool with that.
M: Mmhm.
L: And you’re gonna meet trans women who feel very disconnected from their penis and don’t want to use the word penis, don’t want to touch it, don’t want to have it really be a part of their sexual interactions.
M: Mmhm.
L: It kind of depends on what a penis means to you, right? Like if that feels like a defining part of manhood and you’re not a man, then you might just need to feel like you need to erase that from your sexuality. So, as with always, I think it’s partner specific,
M: Mmhm.
L: you know. Not assuming that a trans partner would or wouldn’t- not assuming what genitals a trans partner has or what they like to do with them, but that if you do get intimate with somebody, no matter what their gender orientation is, then just a little like, “Hey, what are you into? Is there anything-” kind of the stuff that we, that Megan, that we talked about with some of those questions,
M: Mmhm.
L: You know, “What are you into? Are there parts of your body that are off limits?”
M: Yeah.
L: “Are there terms you’d like me to use?” I think it’s the safest way to go about that and help somebody still feel like you’re respecting where they are with their body.
M: Yeah. And not a question you would just ask someone right when you meet them, but when you’re closer (laughs) with them. ‘Cause I know a lot of people ask these kinds of inappropriate questions, and I’m glad that they felt comfortable to ask us this, although when I got it I was like, “This is a Leigh question.”  ‘Cause I have no idea.
Both: (laugh)
L: Well and the thing is too, there are two sides of this right, ’cause I don’t want to, as a cis woman, I don’t want to speak for trans people, obviously, but also, as a cis woman who doesn’t have to deal with this and who does work in the world of like sex education, I’d much rather be the person answering and doing the educating than someone just going up to kind of a random trans person and being like, “How do you feel about your penis?”
M: Yeah. Thanks for asking us this question.
L: Yeah, and folks who are listening, if you heard either of those two questions and you had some insight about the answers or you agree with us or you absolutely don’t agree with us or have a totally different opinion, we’d love to hear it.
M: Yeah.
L: You can send us an e-mail. You can send us a message on Instagram.
M: The ‘gram.
L: However you want.
M: And we could read your e-mail, or not. You just let us know
L: Yeah.
M: what you want us to do with it.
L: Right. And if you do have just general questions or Ask Sex Coach Leigh type questions
M: Mmhm.
L: keep sending ’em in and we’d love to talk about that.

(commercial break)
M: Here’s something we think you’ll like. Check out our friends over at the Gayish podcast:

Megan: Okay, so I will kind of intro this episode 3, The Big Exhale of Truth. I mean, first of all, I love Janet. She’s one of my really, really good friends, but she’s such a great speaker, and her partner Ted, their chemistry they have together, just listening to them, it made my heart so happy. They talk about- both of them are bisexual.
Leigh: Mmhm.
M: They talk about dating, the way they met. They have a really lovely polyamory story
L: Awesome.
M: and I love it because Janet has children who are, I believe one’s a teenager and one’s in the early 20s.
L: Okay.
M: But Ted, her partner, is not the father of the children but has been in their lives for almost like ten years, so I really like the way that they’ve like navigated home and family life together
L: Yeah.
M: as a polyamorous couple and I always joke with her that she’s my poly goals.
L: Mmhm.
M: Like I love the fact that she considers herself married to these two people,
L: Yeah.
M: spiritually married to one, and legally married to the other, and it’s just so nice to hear the way she talks about her husband and her partner and how strong both those connections can be ’cause I think for a newer poly person like me, there are still concerns about like, how far can I go with someone else? Is it gonna take away from what I already have?
L: Absolutely.
M: So, I just love them, and I hope that you guys will too.
L: And just to clarify, Megan did this interview before we started this podcast,
M: Mmhm.
L: but we definitely wanted to include it. This was when you were at Sex Down, no
M: Thunder in the Mountains
L: Thunder in the Mountains. I’m like, it has another fun name that seems like it should be like an amusement park ride or a cocktail.
M: (laughs)
L: Awesome. Was that early, was that in 20-
M: July 20-eigh, 20-seve, no
Both: 2018
M: (laughs) I’m like 2017
L: I’m like, it was seven years ago
M: (laughs)
L: but we’re throwing it in here. So, yes.
M: So we didn’t do the Queer and A because we hadn’t set that up yet, and I cut this episode in two, so the second part will be where they go into kind of more what does queer mean to them, but it was so long. There’s like ten things that I’m gonna be putting on Patreon over the next week, so if you wanna join there, go to supportqnd.com
L: Yeah.
M: Yeah.
L: Yep.
M: or patreon.com/queersnextdoor. It’s been fun for me, throwing up those things that have been cut out there.
L: Yeah, and a reminder, you can join for as little as a dollar, and I will send you some stickers and some cute stuff in the mail, and then following this next episode, where we’ll answer a few more questions and we’ll finish up with Ted and Janet, then we’re going to continue episodes where we’re bringing in other fantastic queer folks and asking them questions and having conversations.
M: Yay.
L: So, we’re looking forward to our 2019 schedule of guests.
M: Yess. So Janet goes by Bella online a lot so I think in the episode you’ll hear me refer to her as both, Bella and Janet. But Janet is a consent and sex educator, she calls her self legalista and advocate. She’s an attorney. I believe that’s why legalista. Chicana, geek mom, polyamorous, bisexual. She brings a trauma-informed lens to relationships, public policy, and geekdom. Is that what it says?
L: That makes sense.
M: Yeah. And then her partner Ted is a crisis psychotherapist turned coach, looking to help others on their journey to success and confidence. He also actively competes in Brazilian Jiu-Jitsu and he’s a hottie. We talk about that a little bit in the episode.
Both: (laugh)
M: So I hope you enjoy listening to Janet and Ted.

L: Thanks for listening to Queers Next Door. We hope you enjoyed it. Be sure to follow, subscribe, and leave a review wherever you listen to your podcasts.
M: If you like what we’re doing, join the Queers Next Door fan club at patreon.com/queersnextdoor to receive all of our exclusive content, and we’ll mail you a fun little surprise. You can find the link on our blog queersnextdoor.com. Cheers, queers!

Listen to the episode here!

656 comments on “Episode 3 Transcript – The Big Exhale Of Truth”